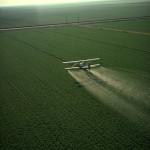 I have copied part of an email I received from SierraRise. While the link to sign this petition is  temporary, the information about RoundUp and glyphosate is permanently relevant. Monsanto says that RoundUp is safe for humans because humans don’t have a shikimate pathway which is used by plants and bacteria to produce tryptophan, phenylalanine and tyrosine. The problem is that the bacteria in our guts do have a shikimate pathway and use it to produce the above nutrients. We depend on them for this and this is part of the reason why glyphosate causes health problems in humans. Please read the following exerpt from SierraRise:

Chemical giant Monsanto’s herbicide, Roundup, has all but obliterated the monarch butterfly population.1 To be more precise, the Center for Food Safety has said that the monarch population has declined by 90 percent in less than 20 years!

And it doesn’t stop there. The key ingredient in RoundUp, glyphosate, has been linked to a host of environmental and health issues. The effects of it are so dangerous that California just became the first state to announce its intent to label glyphosate as a chemical “known to cause cancer.”

The evidence against Monsanto’s Roundup is mounting. Tell EPA Administrator, Gina McCarthy to follow the example of California’s bold leadership. It’s time to label glyphosate as cancer-causing and begin the process of imposing stronger regulations on the chemical.

Glyphosate doesn’t just kill weeds. The chemical has also been linked to a rise in celiac disease, Alzheimer’s, obesity, cancer and others conditions.5 Despite these findings, the EPA still considers the chemical to be safe. This could have something to do with Monsanto’s corporate lobbyists and the company’s financial backing to fight against regulations like these for years.

The benefits for Monsanto are not enough to justify the potential long-term risks glyphosate and Roundup pose to our health and the environment. Tell the EPA to label glyphosate as a known carcinogen.