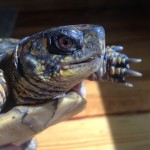 I have a special love for turtles.  When I was 6 months pregnant, I was so thrilled to go snorkeling in Tulum, Mexico and swim beside giant sea turtles. I was touched by their wise and gentle spirit. When our daughter was born, we decided to name her Kameko (though we changed the spelling and don’t pronounce it properly) which means ‘little turtle girl’ in Japanese. I am concerned for the future of humans and turtles because of all of the pollutants we have introduced into the environment. I hope that we, as a species, wisen up.

This Common Water Contaminant Affects This Species’ Gonads – What’s It Doing to You?

A little known fact for non-scientific types: the temperature of the environment determines a turtle’s sex during its development in the egg.

Unfortunately, a pilot study conducted at the University of Missouri has demonstrated that BPA (bisphenol A), a synthetic chemical that mimics estrogen and disrupts hormone levels in animals, can alter the reproductive system of turtles exposed while in the egg.

Gonads of Male Turtles Were More Like Ovaries Than Testicles
Researchers exposed hundreds of turtle eggs to a low-dose solution of BPA, and incubated them at cooler temperatures to produce male turtles. A few months after they hatched, the turtles’ sex organs were studied, and the males had developed gonads that were closer to ovaries than testicles.

This told the researchers that the presence of the BPA overrode the effect of environmental temperature on developing turtles. According to Sharon Deem, director of the St. Louis Zoo’s Institute for Conservation Medicine and lead researcher of the study, the feminization effect caused by the BPA is likely to result in an inability to reproduce in affected turtles. Deem also believes the findings point to the potential for similar issues in humans.

According to researcher Dawn Holliday, assistant professor of biology and environmental science at Westminster College, turtles are known as an “indicator species” because they are a measure of the health of an entire ecosystem. The impact of a particular chemical on turtles is an indicator of that chemical’s potential effect on humans.

Holliday describes the study’s findings this way: “Data from our 2013 pilot study with painted turtles showed that embryonic exposure to low doses of the endocrine disruptor bisphenol A (BPA) produced disorganized male gonads with ovarian-like components.

“These anatomical changes may have broader reproductive consequences and adversely affect a group of vertebrates already in decline.”

Many Synthetic Chemicals in Consumer Products Are Endocrine Disrupting Compounds
The endocrine system is composed of glands and hormones that regulate several important physical functions in animals, including the ability to reproduce. Since the mid-1950s, scientists have been identifying many of the man-made chemicals used in the manufacture of consumer goods ranging from plastic products to pharmaceuticals as endocrine disrupting compounds.

Exposure to chemicals that mimic and interfere with natural hormones negatively affects animal and human health, particularly the reproductive and neural systems. And the problem doesn’t end with the first exposure. Studies show that future generations are adversely affected as well.

BPA Is Contaminating Over 40% of U.S. Rivers
For their study, the researchers used the same levels of BPA that were found in samples from Missouri waterways. Estimates are that BPA is present in over 40 percent of U.S. rivers. Not only are BPA-containing plastics contaminating our water, but estrogen also enters the waterways through the urine of men and women – especially pregnant women and those taking birth control pills. Wastewater treatment facilities can’t eliminate all hormones, which means they are sent back into the natural water system.

The researchers hope to take their lab study into a real world environment so they can take blood samples from turtles to determine their level of contamination. Of significant concern is that chemicals in the waterways are already altering the natural sex selection of turtles, leading to extinction.

The health of turtles is a dependable indicator of the overall health of the ecosystem, because turtles live in oceans, rivers, and on land, and scavenge food from decaying plants and animals. So while this research involves just one species, common sense should lead us to the conclusion that we’re all at risk of endocrine system damage from contaminated waterways.