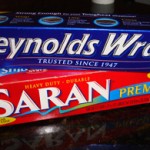 This is an article from Slate.com by Nina Rastogi that I found to be enlightening on the dilemma of how to store leftovers.

Judging by conversations the Lantern has had with her colleagues, most people seem to believe intuitively that aluminum foil is better for the planet, maybe because plastics are made from fossil fuels and we’ve heard so much about how they’re polluting the oceans. Plus, foil can be rinsed and reused with relative ease, or sometimes even recycled at the curb, while plastic wrap is usually thrown away.

But as we discussed in our analysis of beer containers, aluminum has a heavy manufacturing footprint. It takes a whole lot of energy to mine bauxite ore from the earth and then process it: Producing 1 ton of aluminum ingots requires 170 million British thermal units of energy and spits out about 12 tons of carbon dioxide-equivalent. By comparison, producing 1 ton of low density polyethylene pellets requires just 17 percent as much energy and generates 12 percent as much greenhouse gas. (Consumer cling wrap used to be made out of polyvinyl chloride, a substance reviled by many environmentalists, but now it’s nearly all LDPE or its tougher cousin, linear LDPE.) Making matters worse, aluminum foil is a lot heavier than cling wrap: Foil typically clocks in at about 3.8 grams per square foot; cling wrap, just 1.7 grams.

What does that all add up to? To answer that, the Lantern turned to COMPASS, a nifty software tool from the Sustainable Packaging Coalition that allows you to compare the environmental impacts of different packaging materials, from manufacture to disposal. The Lantern decided to compare 1 square foot of aluminum foil and 1 square foot of LDPE cling wrap—about as much as you might use to cover a bowl of leftover pasta before sticking it in your fridge.

Aluminum foil was the loser in nearly all the metrics COMPASS assesses (PDF), including fossil fuel consumption, greenhouse gas emissions, human health impacts, aquatic toxicity, and potential for eutrophication (a kind of water pollution, caused by excessive nutrients, that can lead to fish-killing algal blooms).

However, there are ways that foil can narrow those gaps. Reuse is one straightforward option. According to COMPASS, if you use one piece of foil three times, it will contribute less aquatic toxicity than using three pieces of LDPE, and it just about matches the plastic on fossil-fuel usage and eutrophication. You’d have to use that foil six times, however, before the greenhouse gas emissions and human health impacts were comparable as well.

Foil made with recycled aluminum can reduce the impactsassociated with manufacturing. Aluminum—unlike plastic or paper—can be recycled forever. According to one industry estimate, household foil already includes between 25 percent to 40 percent pre-consumer recycled material—i.e., factory scraps and trimmings—with the rest coming from freshly mined, virgin metal. The Lantern knows of two companies, Reynolds and If You Care, that make foil with what’s billed as “100 percent recycled content.” In Reynolds’ case, that content is a fluctuating mix of pre-consumer and post-consumer material (i.e., metal that’s already had a life as a can or a pot). If You Care foil contains only pre-consumer material.

Figuring out how much energy and emissions you’d actually save with these products is hard, though, because the environmental credits for pre-consumer material can be tricky to calculate. The benefits of recycling depend on the idea that waste is being diverted away from landfills and then used in place of virgin material. But most factories don’t throw away their unwanted aluminum scraps: They sell them to other manufacturers or back to their suppliers. Since those scraps aren’t likely to get “lost” in the solid waste stream, should they really count as recovered material? Some analysts say yes, some say no. (Both Reynolds and If You Care report significant energy savings with their products, based on calculations that follow the first methodology—i.e., treating pre-consumer material the same as post-consumer material.)

So recycled foil is probably a better choice than traditional foil of the same weight—provided, of course, that it works as well (though it is likely to be more expensive). Because no matter what you use to cover your leftovers, the important thing is that the food stays fresh and tasty (PDF). After all, there’s no point in using disposable packaging of any kind if you’re just going to throw away the food that’s wrapped inside.

Nina Shen Rastogi is a writer and editor, and is also the vice president for content at Figment.