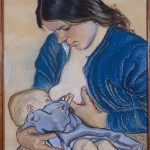 While this study is very small, it is cause for alarm. Glyphosate, the main ingredient in RoundUp, helps heavy metals cross the blood-brain barrier.  Heavy metals in the brain can cause a variety of neurological, behavioral and memory issues. They are not easy to remove from the brain once they have taken up residence there.

Glyphosate, the toxic chemical found in Monsanto’s herbicide Roundup, has now been found in the breast milk of German women.

Glyphosate is proven to cause a myriad of ills and is appearing at alarming levels in human beings.

The Green Party warned on Friday about the health risks of breast-feeding after traces of a substance found in weed-killer were found in breast milk.

The Green party made their warning after testing the breast milk of 16 women from a variety of German regions.

Traces of glyphosate, a chemical used in weed-killers, amounting to between 0.210 and 0.432 nanograms per mililitre (PPB) were recorded.

For breast milk testing results for Glyphosate from the U.S. in 2014, click here.

In drinking water a quantity of no more than 0.100 nanograms of the substance is allowed.

Irene Witte, professor of toxicology at the University of Oldenburg described the findings as “intolerable.”

“I would never have guessed that the quantities are so high,” she said.

Test Yourself and Your Family for Glyphosate Residues

Witte warned that no conclusions should be drawn from tests on 16 women, but added that this was a first indication that there is a problem. She called for the tests to be broadened to included a larger sample set of breast-feeding women.

The extent to which glyphosate is harmful to one’s health is still contested, but in March the World Health Organisation’s cancer research programme designated the substance as “likely carcinogenic.”

Witte said that if the chemical is proven to be carcinogenic then any exposure could be dangerous.

“There is not upper limit you can then put on the quantity. Every molecule could cause cancer.”

The chair of the Environmental Committee in the Bundestag (German parliament) Bärbel Höhn of the Green Party, called for government action.

“The government needs to take glyphosate out of circulation until the question of its links to cancer has been cleared up,” she said.